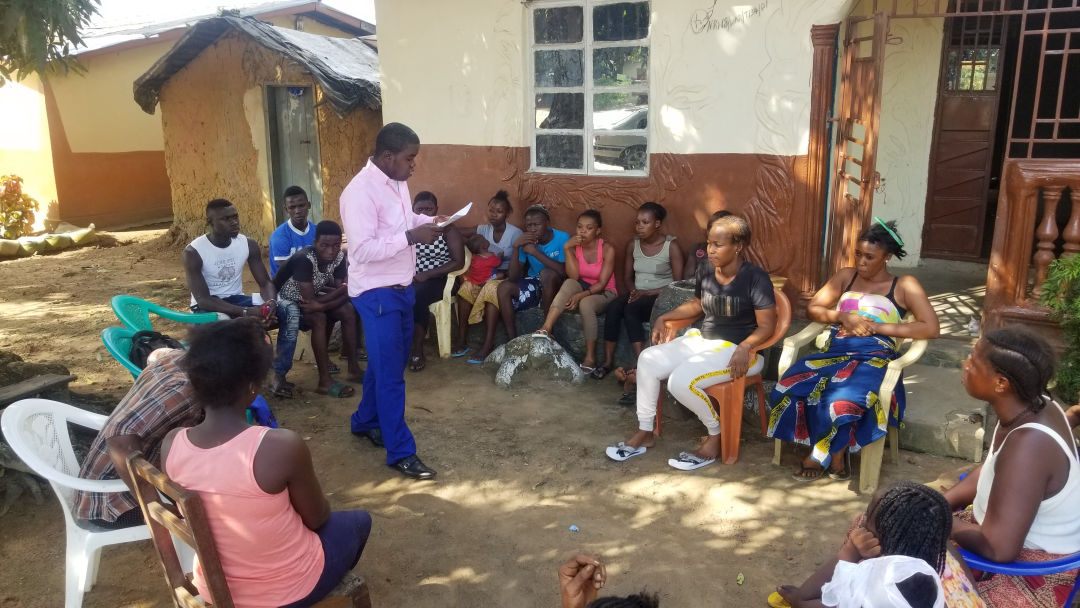 What we have done;

The GAA project is a jointly implemented program in several African Countries. YACAN joined Plan International and Defense For Children International to roll out the project in Sierra Leone, Girls and Young women issues such as gender inequality, economic empowerment and lobby the government to ensure they review policies and laws that discriminate against girls and young women. The GAA project empowered YACAN to earnest’s it strength as a local Civil Society that built the capacity of young women and girls to eliminate harmful traditional practices through advocates on gender, education and right to economic empowerment. over 1000 young women from four communities in Western Area Rural and Urban were actively involved in project throughout the five years of implementation, the family Support Unit (FSU) of the Sierra Leone police and Child welfare Committee (CWC) established by Ministry of Social Welfare Gender and Children Affairs were trained on improved skills on the protection of children and gender, Community stakeholder’s and young people in our Community action groups with Soweis developing community bylaws to stop FGM practice in their communities.
Civil society lead major advocacy on Child Marriage Laws, Teenage Pregnancy, Gender Laws and Joint monitoring were conducted on government commitment to improve women and Girls issues in Sierra Leone. The GAA program was a successful project implemented by YACAN and other partners in Sierra Leone. This has contributed to the organization being more active on national issues as a major Civil Society Organization in Sierra Leone.

In 2015 the government of Sierra Leone announced 14,000 adolescent girls could not return back to school as a result of teenage pregnancy during the Ebola pandemic period as schools were closed in the country for about ten months. YACAN approached Save the Children International (SCI) who developed a joint project with YACAN two other CSOs partners. The second Chance project as it name implies was an effort by CSOs to support girls who are single mothers and are under 18yrs to be reintegrated back into normal life and get formal education. YACAN identified over 800 girls in four slum communities in Western Urban Area, who were child mothers and some were as young as 12yrs. After intensives counselling 100 girls between 12yrs and 16yers agree to return back to school and YACAN worked with SCI and the Ministry of Basic and Senior Secondary School Education to re-enrolled in schools with the project providing all scholastic materials needed by the girls including other supports to ensure they stay in school with community mentors to support them, another 100 young women between 17yrs and 19yrs were supported to join TVET centres, economic empowerment with the VSLA methodology was introduce to 600 of the girls who are currently engaged in some economic activities. The project shows the need for YACAN to scale up this kind of Project as it was a pilot and an eye opener that show the level of vulnerable girls and young women who’s hope has been dented due to teenage pregnancy and early motherhood.

The GEC-2 was a complementary project developed by the GEC consortium which invited YACAN to share its expertise in working with communities to support Ebola affected Children (Girls) in Western Area Rural to ensure they return back to school and provided scholastic materials to support Girls. YACAN worked with schools authorities to provide training for teachers so they will eliminates all forms of discrimination that may reduce girls confidence not to return to school. YACAN ensure 800 girls in 20 communities in the Western Area rural who were infected or affected by the Ebola Virus to return back to school, trained teachers to provide psychosocial support to girls including introducing 20 study groups to help the 800 girls and ensure all learning materials reaches the girls to return and stay in schools.

In 2014 Sierra Leone was faced with the Ebola Virus Pandemic, for the first time after the end of the civil war in 2002, the country was on a cross road with an health emergency that infected 11,000 people and took the lives of 4,000 in Sierra Leone, YACAN interventions on the Ebola virus pandemic was to conduct social mobilization in high risk communities and distributes food (dry ration) to families and affected people in quarantine homes. YACAN was among the three organizations responsible to address the crisis on food support to homes in the Western Area Urban and Rural so people will not leave quarantine homes. During the period of 2014 to 2015 YACAN conducted community social mobilization to 50,000 households in over 100 communities in Western Area Urban and Rural District also food supplies and non-food items including WASH items were provided to 35,000 house-holes who were quarantined as a result of the Ebola Virus. Young people mainly volunteers from YACAN lead the process by providing professional technical services with YACAN hiring 50 staff and 100 youth volunteers to engage in social mobilization in all 48 wards in the western area. YACAN and the youth volunteers in communities contribute strongly to reduction of community transmission of Ebola virus in Sierra Leone. The REPT project was implemented by YACAN and Plan International with supported by DIFD. 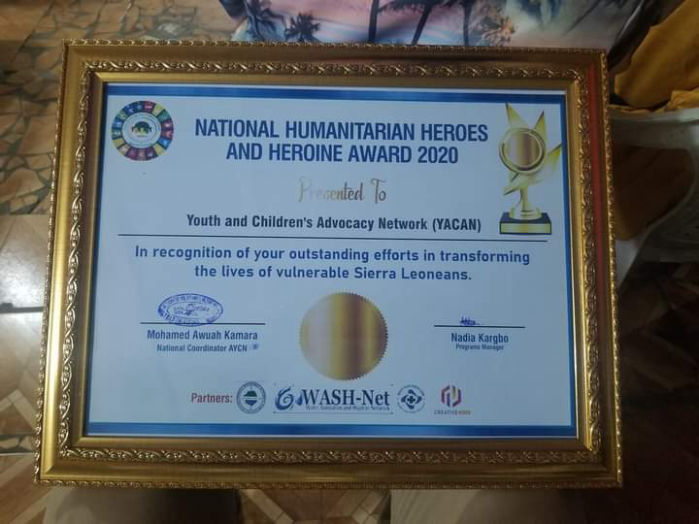 What we have done; 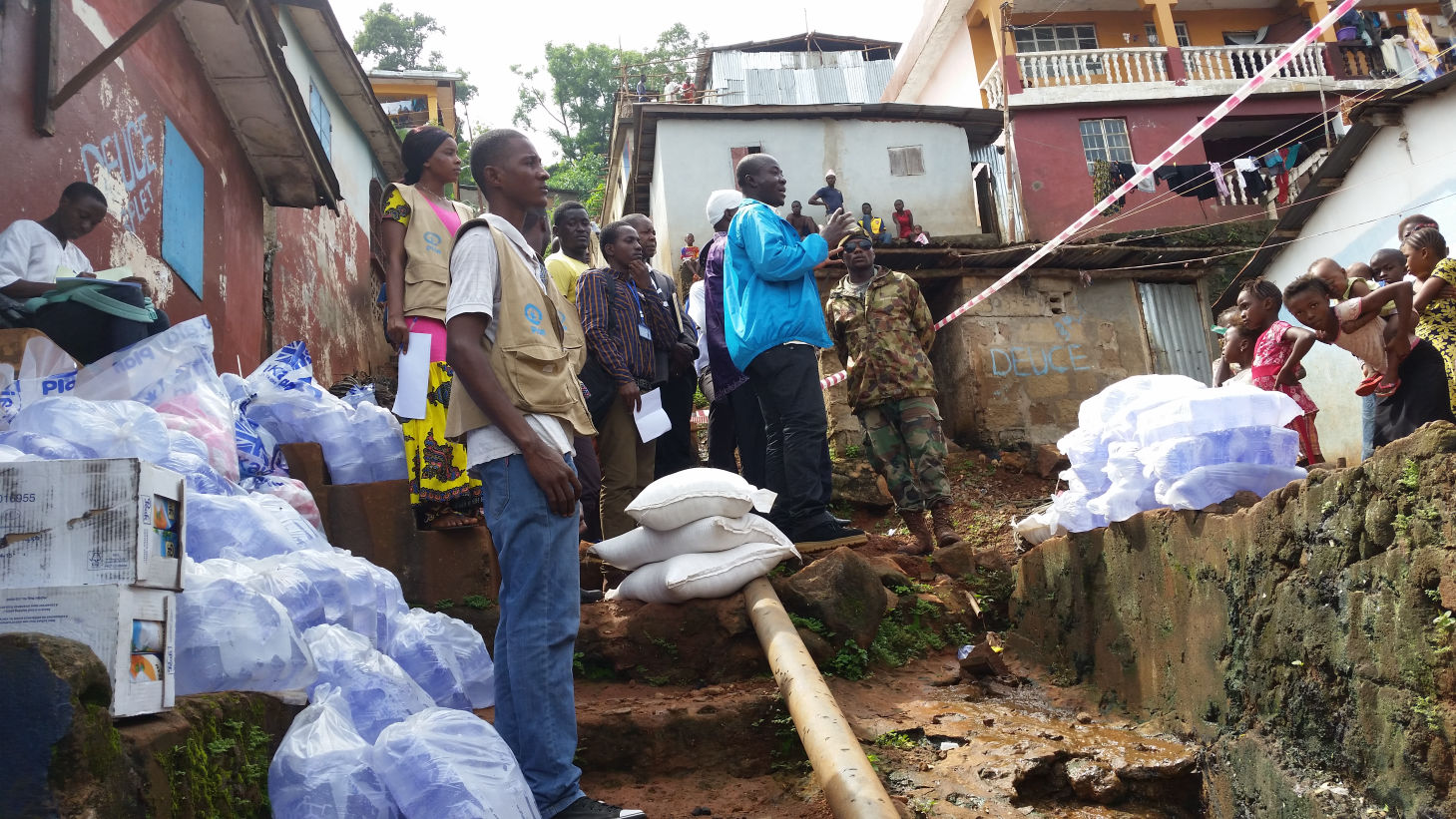 YACAN Girl Power Project which was implemented in Freetown and Moyamba District supported over 6000 girls to complete basic education, with gender disparity that was in existence with increased sexual gender base violence in communities, creating the gap on girls and adolescence. The project targeted 8 communities in Freetown and 10 communities in Moyamba, introducing peer educators program in school to tackles SGBV and providing support to 20 schools to training on gender and Children rights to ensure girls complete basic education. Adolescent girls at communities were also provided with some basic economic empowerments and life skills. 800 young people in all 8 communities served Peer educator to engage young women and girls on Sexual Gender Base Violence prevention. In all 20 schools in Moyamba and Western Area enrolment and retention rate of girls increase by 25% over the five years of implementation.

Economic inclusivity and empowerment for young people (Youth) after the civil war in Sierra Leone was a noticeable challenge that face youth. In 2012, Plan International and three other organizations including YACAN developed the YIEE project, using the village Savings and Loan Association (VSLA) approach to mobilized young people in the urban slums and communities with economic activities to introduce a workable approach towards economic empowerment through saving their income and investing it in small business ideas to grow their income. YACAN created the opportunity to incorporates life skills, Sexual Reproductive Health Education and Basic Numeracy skills to young people (women) who had not have the opportunity to attend school from childhood. 5000 young people benefited from this project in Western area Urban and in Moyamba District. Youth linkage was also part of the project as youth from Sierra Leone where link with young people from Finland as the project was supported by Plan Finland.

Learn Without Fear Project was developed to address the challenge of violence in schools among children and to reduce corporal punishment by teachers with other forms of gender base violence that reduce girls and boys confidence to enrol and stay in school. With the existing retention challenge, identified by the Ministry of Education as more girls were drooping out of school. YACAN and its partners were convince that working with children through peer educators club, supporting school authorities and teachers/ Guardian councillors with trainings in School, conduct awareness raising and mentoring high risk schools will create the change, 50 schools including 2,000 children benefited from this project and 40% of school violence was reduced in all project schools. 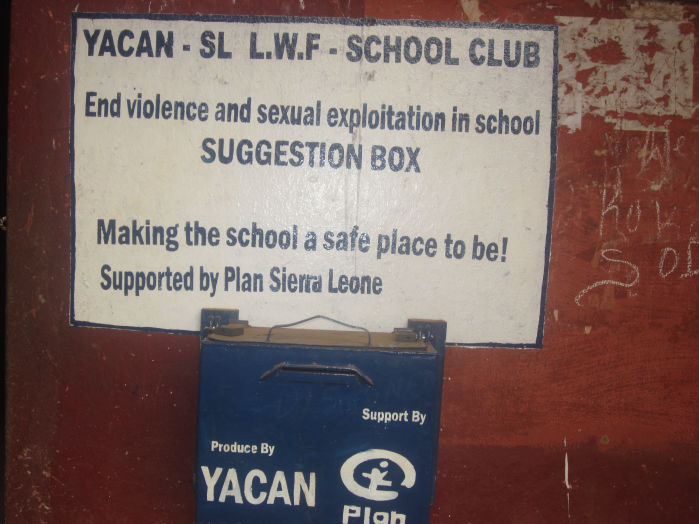 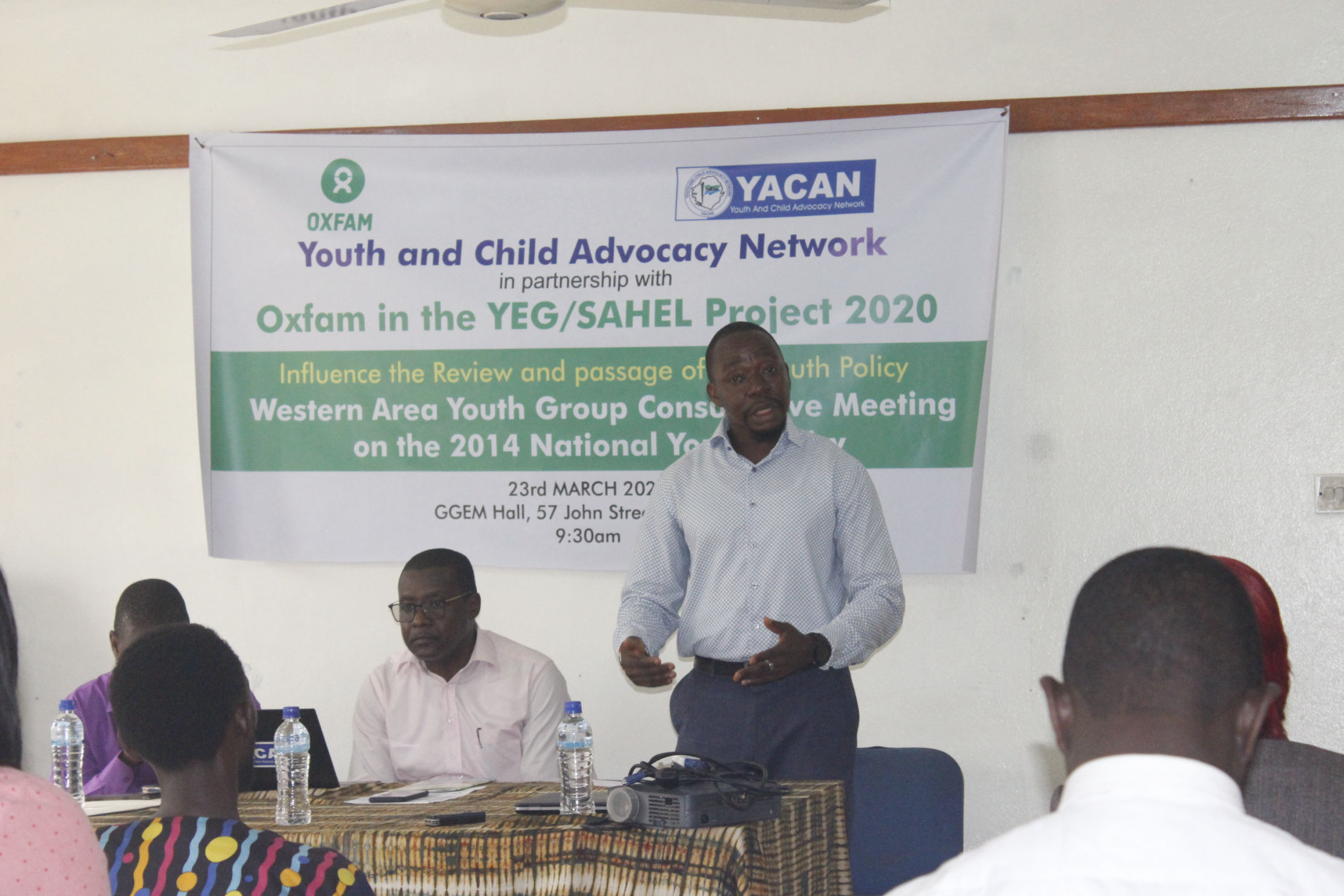 YEG Project implementation in Western Area, Kono and Kaoinadugu with Oxfam International Sierra Leone is a model project supported by DANIDA. This project promotes 100% advocacy for young people mainly on their inclusion in Governance and Education. YACAN and Oxfam has influences many issues identify by young people through this project including call for Government to review the National Youth Policy and Mobilize Youth through group/Network to demand by developing position papers, situation report and Call to action to the Ministry of Youth, the Ministry of Basic and Senior Secondary Education and Ministry of Tertiary and Higher Education on issues relating to Technical Vocational Education and Training (TEVT). Through the YEG project young people are also supported to engage duty bearers in accountability forums where senior members of government have attended and make commitments to work with young people on policies and implementation of Laws.
This project has also created the opportunity for YACAN and other CSO to intensify education Campaign such as the Education Spike Campaign supported by Oxfam ODK, in other for Local CSOs to call on Government to institute’s measures that will regulates the privatization of education and promote public school in low income countries

PARTNER WITH US SUPPORT US
Close

Mission
Vision
Who We Are

DONATE TO US-: HERE

Subcribe for all news from us. Please enter your email to form below.